In Nelson George’s “Gangsters—Real and Unreal,” the author gives an overview of how the musical genre “gangster rap” came to be popular in the inner cities of the United States. Although the author says that gangsta rap “first appeared in the mid-‘80s,” traces the origins of the gangsta rap movement all the way back to events that occurred in America during the Civil Rights Movement of the 1960s and the Vietnam War of the 1970s (George, 129). The author shows how the development of an illegal street drug scene directly influenced the development of gangsta rap music. He also makes a particular argument about the role of certain types of privilege in the growth of rap music with violent lyrics. Throughout the essay, the author makes his point by providing concrete historical facts, details, and definitions. In this essay, George relies on logos to show how socio-economic privilege and skin color privilege created the conditions that led young Black people to create gangsta rap music.

Privilege is the idea that some people are basically born having certain advantages that other people don’t have. What makes privilege interesting is that the people who have it have not really done anything to earn it. In fact, most of the time, the people who have it don’t even realize that it is working in their favor in their everyday lives. This is why Peggy McIntosh calls privilege “unearned, and largely unacknowledged” (301). In this article, the author mainly discusses two kinds of privilege: socio-economic privilege and skin color privilege. Socio-economic privilege deals with social class and income level. People who have this kind of privilege belong to a certain social class, usually the upper-middle class or high class of people. They are people who make a lot of money compared to people in the lower classes. They are people who have status and influence in society, and their children and young people probably have opportunities that children and young people from lower classes don’t have. Skin color privilege deals with skin color, or what race or ethnicity a person looks most closely like or identifies with, whether it is African American or black, Caucasian or white, Hispanic, Asian, Middle Eastern, etc. In America and other countries around the world, people with lighter skin have more privilege. That means that white people have more privilege than other people, and black people often have less privilege than others based on skin color. Privilege is pretty much the reality of living in America. Some people are just automatically better off than other people based on their privilege. This is definitely true for the young people who created and listened to gangsta rap in its early days.

George’s argument in this text is that gangsta rap grew out of the bleak situation of young Black people from lower socio-economic classes living in inner cities. To make his argument, he relies heavily on the rhetorical appeal logos, or logic. George develops a logical argument using real historical facts, definitions, and details. To start off, he goes all the way back to the Civil Rights Movement of the 1960s. He talks about how after the Civil Rights Movement, many black people were able to earn enough money that they achieved “middle class” status. These people were from all different walks of life: doctors, lawyers, bus drivers, teachers, and government workers. Because they made more money, they were able to move out of the old “bad” black neighborhoods that were still full of people who didn’t have much money. When the middle class black people moved out, so did the middle class white people. George calls this “white flight” (122). This left the old black neighborhoods more vulnerable and open to crime and drugs. George’s explanation of how black neighborhoods saw a downfall after the 1960s is rooted in historical facts. This is one of the first signs that the writer is relying on logos.

George continues to use historical facts in his argument when he talks about how heroin invaded the inner cities during the Vietnam War. He brings in a statistic: “the U.S. Army estimated that 10percent of our soldiers used heroin while in ‘Nam and that 5 percent were hardcore junkies” (George, 122). He talks about how black criminals transitioned from running numbers and dealing in prostitutes to dealing in heroine. He begins to draw on specific aspects of the culture from that period in black America like Richard Pryor’s standup comedy routines and the Holloway House novels written by Iceberg Slim and Donald Goines. He discusses the government and police programs that contributed to the rise of heroine abuse in the inner city streets, such as Nixon’s cut to antipoverty programs. He even goes into the popular “conspiracy theories” about how the FBI and the CIA might have introduced heroine to poor black communities in the first place. All of this information is given using historical facts, dates, and statistics, which contribute to the author’s use of logos to make his argument.

The author continues his logical argument by explaining how the heroin epidemic led to the even more debilitating crack cocaine epidemic in the 1980s. He uses concrete definitions to tell the reader what crack is, explaining in detail how pure cocaine has to be boiled in water and cooked down to make “freebase,” which then dries up and becomes “crack.” He uses statistics to show how the drop in cocaine prices globally fueled the crack epidemic in America’s urban inner cities: “the price dropped from $50,000 a kilo in 1980 to $35,000 a kilo in 1984 to $12,000 in 1992” (George, 127). He also uses statistics to show the impact of crack on the city (“by 1992, it was estimated that 150,000 people were employed in New York City’s drug trade”), on young women (“40% of all crackhouse denizens were female”), and on young men (in 1990, “one in four African-American males between twenty and twenty-nine—610,000 men total—was either behind bars or on probation”) (George, 128). The use of concrete definitions and specific statistics help develop the author’s logical argument.

The final section of the text is when the author connects the drug epidemics in America’s inner cities to the creation of gangsta rap by young people who lived in the cities and saw firsthand the effects of drugs in their communities. These young people created violent music because it reflected the violence and the hopelessness in their lives. This section is where the author drives home his argument: that the lack of two types of privilege, socio-economic privilege and skin-color privilege, created conditions that led these young people, especially young men, to live violent lifestyles and make violent music. In other words, gangsta rap grew out of the experience of being poor and black in the inner cities of America. By relying heavily on logos to make this argument, the author shows the reader how history and privilege came together to create hopeless conditions in America’s inner-cities, which led to creation of gangsta rap music. 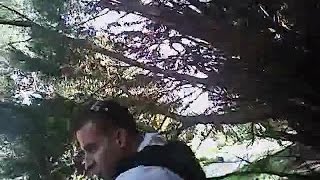